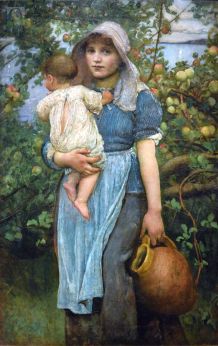 Thanks to a comment kindly submitted by Lara Nicholls (Curator of Australian Painting and Sculpture, National Gallery of Australia, Canberra), have learned that Thro’ the Orchard was exhibited in Melbourne Public Library as part of The Grosvenor Gallery Intercolonial Exhibition in 1887.

The catalogue title of this painting varies from source to source, Thro’ the Orchard, Through the Orchard or The Little Mother (the title currently used by Dublin City Gallery where it hangs). On the evidence of this catalogue entry, the preferred title would appear to be Thro’ the Orchard, so that is the title now used on this web site.

The work was the subject of an exchange of letters between the Swynnertons and Hugh Lane, founder of Dublin City Art Gallery, in 1907. There’s an interesting comment in the last letter saying the painting “wants touching in part,” demonstrating that pictures could be reworked and potentially altered years after their supposed date of completion.

18 November 1907: Letter from Joseph William Swynnerton to Hugh Lane, offering him the picture ‘Through the Orchard.’

1A The Avenue, 76 Fulham Road, S.W. Nov. 8. 1907. Dear Mr. Lane, The …….. picture “Through the Orchard” is well painted in all its parts – …….. pitcher included, but …….. days £150 was asked for this picture, and we should not sell now under £200. We could not afford to give you for some suggestion about Mrs. Matthe…’s little son, but we think it better to hear from Mrs. Matthe…’s herself, so many people seem to wish to have portraits done and then repentt them. In any case my wife thanks you very warmly for your interest in the matter – and hopes you will excuse her not writing herself – she feels unwell – – …….. Very sincerely yours, Joseph W. Swynnerton / over …

“Through the Orchard” must be taken down and cleaned &c.

Undated (presumed to be shortly after 18 November 1907). Letter from Annie L. Swynnerton to Hugh Lane regarding the packing of the picture for shipping to Dublin (catalogue.nli.ie). Some words unreadable. Words in square brackets uncertain.

Tuesday. Studio My dear Mr Lane, The picture has arrived but no word from …….. my husband, better addressed to the Club? How am I to send … “Through The Orchard.” Shall it be packed here & sent direct to Dublin …….. and I will do what you suggest. Something has to be done to the picture before it can go. It wants touching in parts – cleaning & glazing – I think the [plan should be persued / before loading in a case.]

Hugh Lane gave to picture to the Irish nation in 1912, but sadly never lived to see it hung in it’s final home, losing his life on a return trip from New York as a passanger on the Lusitania, sunk by a German submarine in 1915.