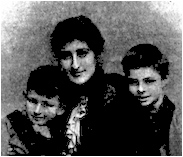 Leonora Philipps and her sons, Roland (left) and Colwyn (right), photographed in The Woman’s Signal (newspaper), 1897.

Colwyn Erasmus Arnold Philipps was a son of Leonora Philipps, a prominent suffrage campaigner, and the Viscount St. Davids, John Philipps, a Liberal Politician. This portrait was painted c. 1896 when Colwyn was seven or eight.

Colwyn attended Eton and chose an army career, becoming a captain in the Royal Horse Guards. He was a dedicated soldier, as well as a passionate and daring horseman, and a poet and writer. A book of his poems, anecdotes and letters was published after his death.

In one anecdote he tells how while on service in the trenches, he entered a French woman’s house to ask if he could borrow a lamp. The woman refused, saying that the last British soldier to borrow a lamp never returned it. He replied that she was being petty, as British soldiers were lending their lives for France, but immediately regretted his abruptness. However, after disappearing for a moment, she reappeared with two lamps and told him to keep them.

Colwyn’s mother died unexpectedly in March 1915, aged only 52. Colwyn himself lost his life just two months later, his last moments described in a short memoir by another soldier who was trying to reach him, describing how Colwyn was leading an attack on an opposing line, charging into what was described as a “hailstorm” of bullets. Only his kit bag was recovered, his body being lost on the battlefield. In the bag a notebook was found, with the following lines written (Colwyn’s spelling and grammatical errors included):

The only other child in the family, Roland, was killed on active service the following year.

John Philipps remarried in 1917 and had two more sons. He remained active in politics throughout most of his life. As a member of the House of Lords, his last speech, made on July 6, 1927, was a call for fair treatment of women when they became eligible for peerage, pointing out that the Prime Minister was allowed to make a judgement on their fitness and character, whereas men were automatically admitted without such questioning.

(Note: Philipps is the correct spelling, not Phillips.)

One thought on “PORTRAIT OF COLWYN E. A. PHILIPPS.”