A Dream of Italy ‘mountain’ and ‘clouds’ versions are assumed by myself to be the same canvas with the background reworked by Annie, perhaps because of criticism of the original version.

[Note: the black-and-white image in the The Sphere, 1922, is untitled, but is identified as A Dream of Italy from written descriptions of the painting in other sources.]

Head of a Bacchante is a figuratively related image, although dated several years later.

A DREAM OF ITALY (mountain version).

‘A Dream of Italy,’ by Mrs. Swynnerton, is a very ambitious composition, and if somewhat dry and incisive, attains a measure of success that, with due deference, perhaps no other woman artist could secure.

In the Central Gallery Mrs. Swynnerton’s “A Dream of Italy,” [and works by Miss Bessie MacNicol] make everything else look a little commonplace. “A Dream of Italy,” the life-sized, semi-nude figure of a woman stepping down the mountain side, has a combination of dignity and beauty that can only be called classical … full of joy

Mrs. Swynnerton’s “A Dream of Italy” (213) … The flamboyant figure of a more than sufficiently endowed (physically speaking) Italian peasant girl flaunts herself from out the canvas. Her dimensions are so liberal as to be almost terrifying. The colour, too, is cast in the same generous mould. Clever the painting is, undeniably: but it is too aggressive, too compelling.

No one can help seeing Mrs. A. L. Swynnerton’s lifesize nude subject entitled “A Dream of Italy.” It is a picture one could see with distinctness a hundred yards away. The iron modelling and metallic draperies suggest that sculpture rather than painting would have been the right medium. Anything less like a dream it would be impossible to imagine.

I am afraid that Mrs. A. L. Swynnerton’s “Dream of Italy” (No. 213) must be considered a nightmare. The massive and large-limbed woman, with very little on, who is squeezing the juice of unripe grapes into her mouth, and posing at large, so to speak, in front of a number of papier-mâché rocks, is not in any way suggestive of the Italy we know now.

A DREAM OF ITALY (clouds version). 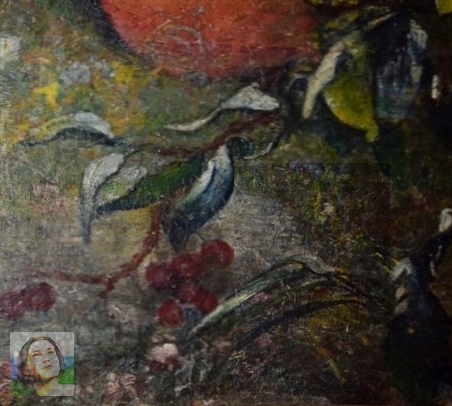 ** According to Gobbi et al (2004) Of Queens’ Gardens, “in 1881 the English painter Annie Robinson (later Swynnerton) exhibited a painting called A Dream of Italy at the independent and avant-garde Grosvenor Gallery in London.” However, this date is thirteen years before any other reference to the painting. Looking at the names of (untraced) works at exhibitions, Annie does not appear to have been painting such subjects until the late 1880s. At the same time, she is recorded as having nudes exhibited as early as 1877, with “Phryne … a nude academic figure” on display at the Manchester Academy (The Manchester Evening News, 16 Mar 1877). Without supporting evidence, as considering the likeness to Head of a Bacchante, dated 1903, I suggest 1894 as the earliest reliable date.

** A wealthy American leather merchant and keen patron of the arts, painted by John Singer Sargent in 1907.

HEAD OF A BACCHANTE. 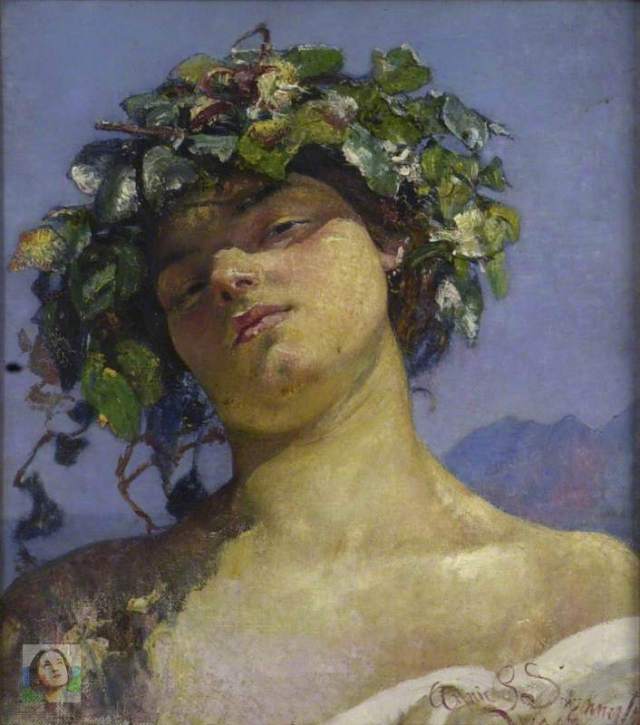 The head is very similar to that in A Dream of Italy, which also suggests that the figure in that composition is a bacchante.

The bacchantes were the female followers of the Roman god Bacchus (Greek Dionysus), who could dance to an ecstatic frenzy, heads wreathed in the god’s sacred plant, ivy, and who were capable of doing great violence to their enemies.

An earlier painting, entitled Bacchante, ‘with a goat … Deep red and blue garments; background of woods,’ is recorded as being on display in the New Gallery catalogue for 1888, so the subject seems to have been a favourite of Annie’s.

Head of a Bacchante:

5 thoughts on “A DREAM OF ITALY and HEAD OF A BACCHANTE.”